Much hype has been thrown on adrenaline -ridden generation Y supporting the Opposition. Yet the statistic by several opinion surveys prooved  that generation Y is  very much an undecided group -refer to  SURVEY RESULT 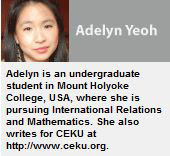 It is also true that the ones making much noise are the group supporting the Opposition. Their opinions are very much in silo - a very homogeneous group that  is affiliated to the kopitiam setting; loud, brazen and very infatuated with the Opposition.
Read one opinion by brave Adelyn Yeoh. Yes, I reiterate, BRAVE Adelyn Yeoh who dare not to jump into the bandwagon and be dictated by this  theory based -no life  experience-no knowledge on the history and fabric making of Malaysian society- rhetoric crowd.
"I recently attended a pro-opposition forum that addressed economic issues of the 1990s and I could not help but notice how similar the attendees were. It was not so much in terms of the way they dressed — they were clad in a whole variety of garments — but they were similar in the way they reacted to the speakers.
One could not help but notice the fixated minds of the general audience. The crowd was quite typical of what you would expect of a kopitiam setting; loud, brazen and very infatuated with the opposition party. To me, it was a sea of homogeneous, single-minded people.
When the speakers expectedly gave their very salient, logical points about the issue, it came as no surprise when most of the audience only responded positively to the almost-slanderous jabs at previous government scandals.
All statements made to maintain stability and to seek economic progress went completely ignored. Instead, attendees were more interested to jeer at side statements including but not limited to "kandang-minium", failures of the royal commission of inquiry, submarines and, even, unresolved murder cases.
It then made me wonder if the attendees were there just to feel better about themselves by mocking the government instead of being there to get enlightened. Is this what our voter population has turned into?
Before I go on, I need to make a disclaimer that I am not pardoning the government from its previous sins — admittedly the amount of nonsense that has plagued the country has increased exponentially in recent years.
Yet this does not mean the converse is true i.e. the opposition has a completely clean slate. As such, it is important for voters to not be swept up by emotions, by the adrenaline of collective angst at the government and, instead, adopt a critical view of all parties.
However, we are moving dangerously towards polarising mentalities. Our voter population is splitting into two very distinct groups; pro-opposition or pro-government. As a result, many people are beginning to adopt this mentality of “with us or with them.”
We are moving towards politics based on superficial qualities and this is dangerous because this will lead to us to blindly supporting parties to all ends, including bad ones. It also becomes difficult for groups and organisations that strive to be apolitical to remain apolitical.
Bersih 3.0 is an excellent example of this. The steering committee and more notably Datuk Ambiga Sreenevasan had stressed the fact that they are an apolitical organisation but, unfortunately, Bersih suffered the fate of being dragged into looking political due to the conduct of opposition supporters during the rally and the overwhelming presence of opposition leaders".
Anakbukitgantang Comments- Recently an exposé found out that 3 Singaporean high ranking diplomats were involved in Bersih 3.0 Why would they get involve in the internal affairs of Malaysia if not for safekeeping Singapore's vested  interest in Malaysia? AIDC expose the 3 Singaporean diplomats as follows
1. First Secretary (Political), Regina LOW Kay Yin (regina_low@mfa.gov.sg), who wore the ‘regulation’ BERSIH 3.0 yellow T-shirt.
2. First Secretary (Political), Philomena AW Li Fen (philomena_aw@mfa.gov.sg).
3. Deputy High Commissioner and Counsellor, Ariel Eunice TAN Hwi Tiang (ariel_tan@mfa.gov.sg)
All three are diplomatic staff members at the Singapore High Commission in Malaysia, Level 15, West Wing, The Icon, No.1, Jalan 1/68F, Jalan Tun Razak 50400 Kuala Lumpur.
In a related matter, last June 11, Malaysian Foreign Minister, Datuk Seri Anifah Aman said, although their presence may have been to gather information or something else, it was not a smart move.  Read AIDC
Adelyn further rub salt on the Opposition's wound by saying:


"This should not be the way to move forward. This is not the only way for change. Wanting change for our country does not necessitate being pro-opposition. You can yearn for change without subscribing to a single political party, without proclaiming how you will follow a particular party to its death.
You can want change by proclaiming to elect the best party at a particular given time. And it is also important to add that your view should be subject to change if the party fails to meet certain benchmarks.
For these reasons I don’t support the opposition blindly. But that does not mean I support the government either. I support the best party, which happens to be the opposition at this particular time. And for that reason I would be more than happy to give them my support now.


However, if one day the current opposition fails to meet my benchmarks and, instead, the current government meets those very benchmarks, be assured that I will be voting for the government. This is not to say that I am on the fence about my political position.
Like many of you, I want what is best for my country. In order to achieve this, we, as a society, must be willing to put our egos aside, learn to perceive local politics in a more critical manner and vote for the best party, regardless of what that may be".
Sources
Malaysian Insider
AIDC
anakbukitgantang
Posted by Anakbukitgantang at Wednesday, June 20, 2012